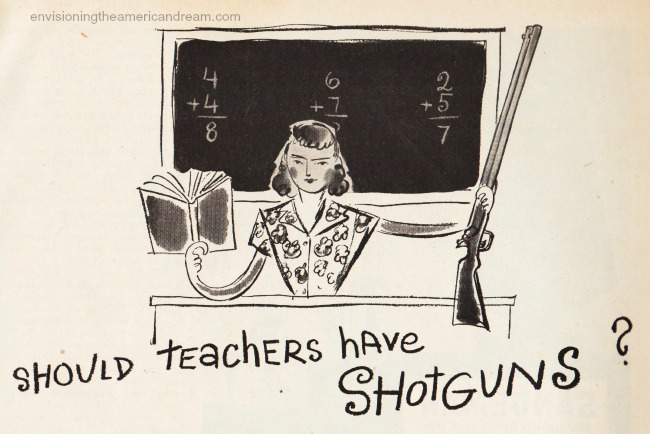 Like nurses, doctors, and the clergy, the vast majority of us of us who are teachers view our profession as a calling. To paraphrase fellow educator Brad Henry, a good teacher can inspire hope, ignite the imagination, and instill a lifelong passion for learning in children. We don’t teach for the money. We teach to nurture and shape humankind’s most precious commodity – children. The payback is in the give-and-take of learning, fostering, mentoring, and the profound joy that comes with discovering something new. Ultimately, the best teachers dare their students to find the best within themselves.

Thus, when President Donald Trump speculates that American teachers could be “on the front lines” armed and ready to confront mass killers, it struck a chord in all of us who are instructors. After all, there have been a number of educators in recent years who have bravely put themselves in front of the children they teach in order to protect them from such madmen. All you have to do is to Google Dawn Hochsprung, Anne Marie Murphy, Aaron Feis, Scott Beigel, or Christopher Hixon and you’ll learn what authentic courage and selflessness really mean. From this lens, virtually every teacher I know would instinctively step in front of a gunman to save his or her kids. After all, we are in the business of saving lives.

But to put a gun in a teacher’s hand? Almost every instructor I know would refuse to do so. Why? For something that educators would inherently understand but many who are not might find perplexing. As one colleague said to me earlier today, “I would immediately think of those children who are already filled to the brim with anxiety and stress. The trust they have for their teachers would quickly dissipate if they knew their teachers were armed. They are not looking for policemen on the block. They are looking for someone to understand them.”

All of us who teach these days know that we are in the front lines of insanity because American politicians as a group do not dare to do what is right and seek sane reform in the area of gun control. Your guns or your children? What is more important to you? That’s rather stark, but the truth can sometimes hurt. Every day for the rest of this school year, we teachers will be there for our kids and their futures. When you think about it, everything else is secondary.

Standup comic Tim Hanlon made a most salient point this afternoon in a series of tweets, which he posted hours after the shooting. He reminded his followers that Chris Kyle, the most prodigious American sniper in recent military history, was shot and killed in 2013 by Eddie Ray Routh, who used a 9mm SIG Sauer pistol. Ultimately, the former Navy SEAL was killed by a deranged veteran with a gun. I wonder if  America’s teachers could stop such a killer if Chris Kyle could not? Given that there were 8,000 American casualties to friendly fire during the Vietnam War, imagine the damage that might occur in a school with an ill-trained, armed teacher?

If common sense and practical gun control can somehow form the basis of a sane approach to the issue, then our nation will be better for it. If that occurs, then American teachers can, in the words of Einstein, continue “to awaken the joy of creative expression and knowledge” within each child and teenager under their immaculate care.